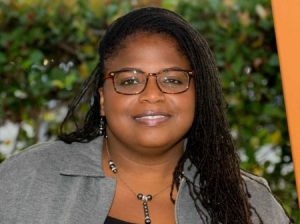 “After being laid off, I got employed again with a company out of St. Louis called Kwame Building Group,” she said. “I did construction management and spent about six months in St. Louis before relocating to their Jacksonville office. I spent two years in Jacksonville before moving to South Florida.”

Snell was tired of the rigorous travel schedule with Kwame and wanted to be closer to Peter Simpson, her current husband and business partner, but boyfriend at the time. She did a short stint with the Performing Arts Center in Miami, working as an inspector, before going to work for WCI Communities as a Land Development Manager. She handled everything from the development of roadways and landscaping to the underground utilities for a large South Florida community. After a few years, Snell was ready to exclusively focus on her own business.

“I actually started JS1 Construction before I left Jacksonville,” she said. “Before I went full-time on it, I helped part-time with the bookkeeping while my husband primarily ran the business. Around 2005, it made sense to go full-time. After working for other companies, I decided I was definitely in a position to do this for myself. Also, after the experience of being laid off, I made a promise to get my General Contractor’s License. I wanted to have options for my future.”

Snell shared that her biggest challenge since day one has been finding the right employees. She’s grown the business by taking advantage of networking and by joining organizations such as the National Association of Women Business Owners. Even though Snell and Simpson have roles that occasionally overlap, they do each have their own focus within the business. Snell is more focused on business development and operations while Simpson is primarily in the field, managing subcontractors and ensuring that jobs are performed properly.

In a crowded and competitive industry, Snell shared how they work to set themselves apart and what their primary focus is. “Around 2010, when the economy was bad, I started looking at what things would be around for a long time,” she said. “I focused on things we wouldn’t grow out of and areas where I could be of the most help. I started to see that people were hanging onto their homes, especially seniors. You had situations where the mother or father would stay in their home and the families lived somewhere else. They didn’t want to go to a nursing home. They wanted to stay in their own homes. That’s when I started honing my skills and educating myself to focus on the Aging in Place Industry. That’s been a focus of ours ever since.”

When Snell and Simpson take on a new project, they like to approach things from a holistic perspective. Looking at the big picture, there are many things they can do to help seniors stay in their homes. Often times there’s an educational gap in terms of what all is possible. After an initial phone call, a visit to the home is scheduled and a list of possible fixes and alterations is compiled. The big thing, according to Snell, is that seniors who stay in their homes are trying to avoid a fall that could lead to further complications. Her ultimate job is to keep them from having that fall.

Because of her Americans with Disabilities Act (ADA) type work, Snell has been called to do consulting work for facilities with ADA compliance issues. She’ll take measurements and make recommendations on ways to fix issues and restore compliance. An additional side of the business is closing violations and open permit issues with standard residential remodeling projects. JS-1 Construction has the knowledge, experience and expertise needed to rectify these situations and save homeowners money and time.

As Snell explained, the joy of running her business comes from the challenges associated with it. “I love solving problems for our clients,” she said. “It may take some time, but I tell all my clients that there’s always a solution and that the right solution is the one you’ve carefully thought out and have reasons as to why you’re making that choice.”

Looking ahead, Snell is focused on building a solid team capable of properly serving their growing clientele base. She’d also like to eventually put herself in a position to focus working on the business rather than in it.

What advice does Snell have for aspiring entrepreneurs? “It’s very rewarding to be an entrepreneur,” she said. “Once you’ve been out there, and you decided to start your own business, you will not go back to working for someone else. If you do start a business, the best thing to do is to find a way to start building your team sooner than later. It’s very easy to get into a routine of doing things yourself because you think no one can do it as well as you, but you’ll miss out on things because you can’t be everywhere at once. You’ll get burned out. The last thing I’ll share is something a good friend of mine recently said in interview. She said, ‘The smartest thing I did was to hire people that are smarter than me. After I hire them, I empower them, give them what they need to perform their duties and then get out of their way’.”

If you have questions about home remodeling in Palm Beach and Broward Counties, call 954-410-9566 or complete our online request form.